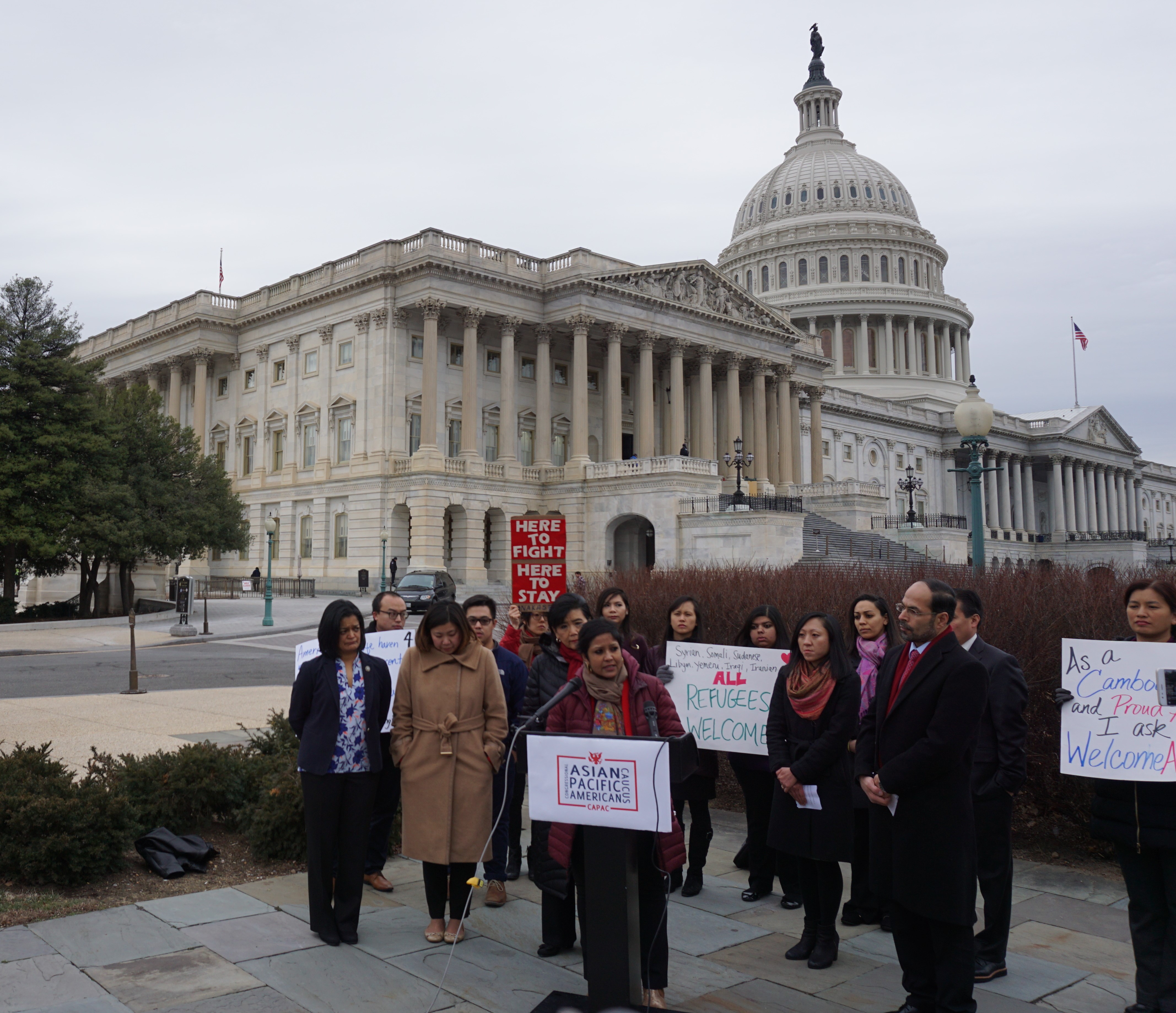 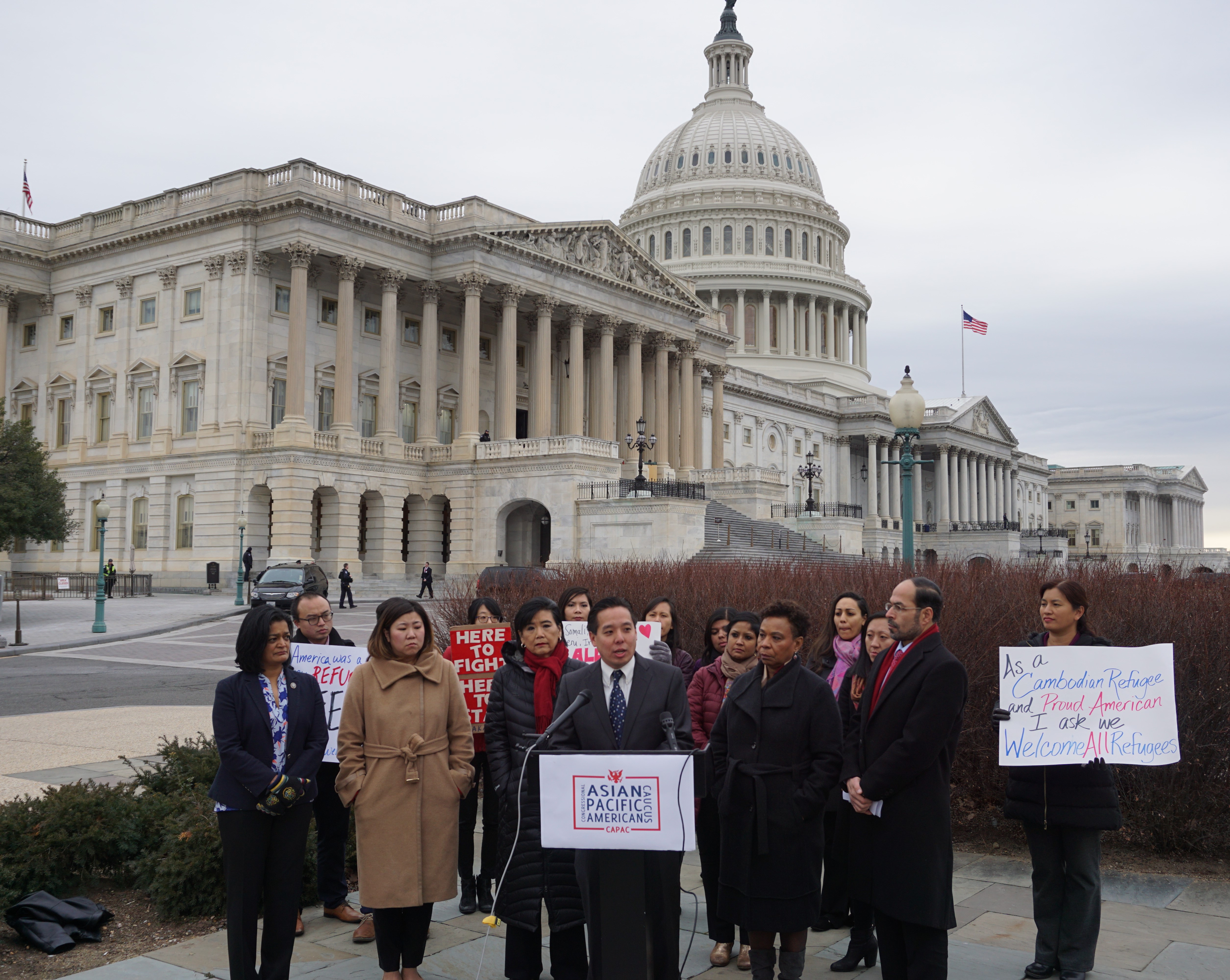 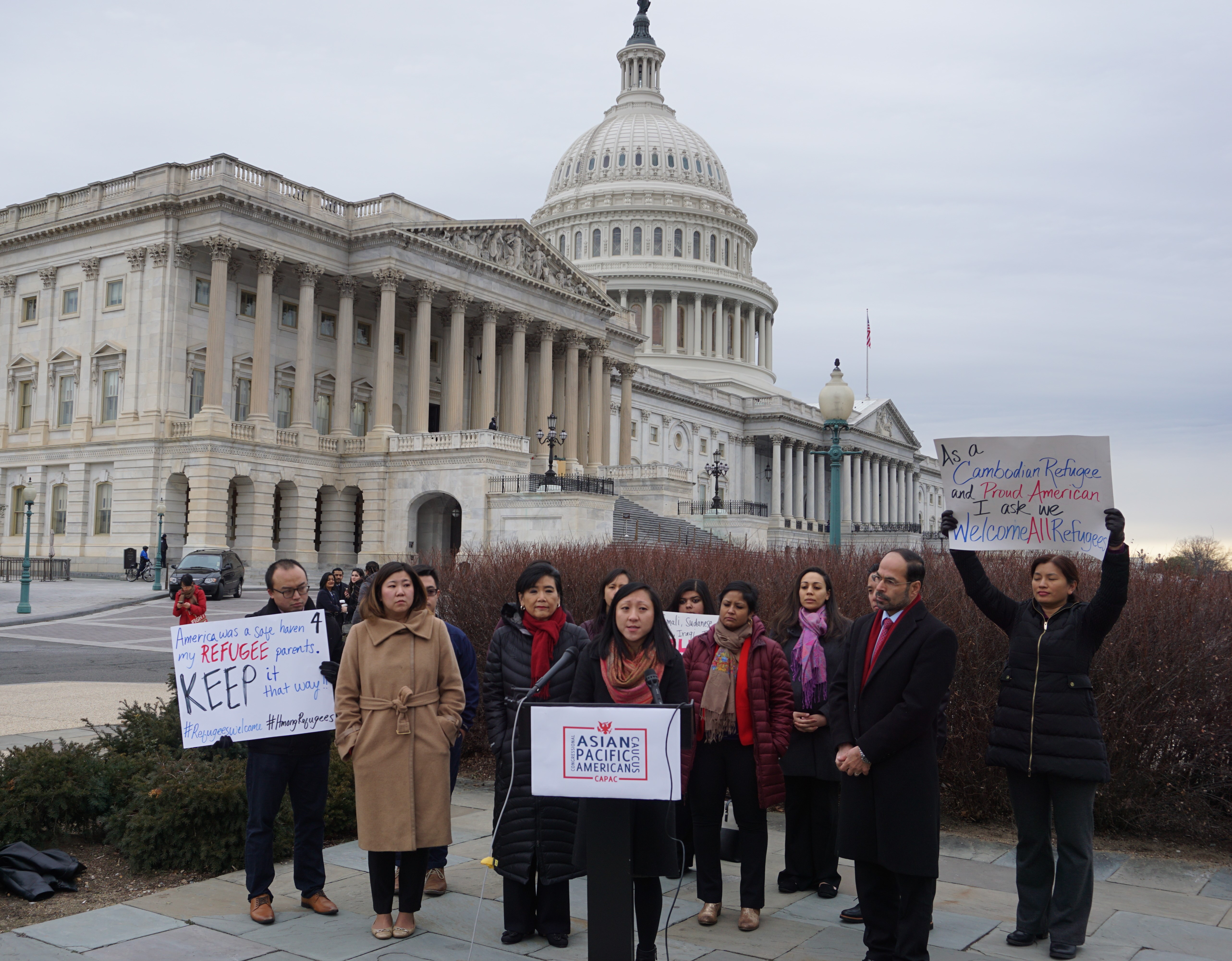 “These actions signal to the rest of the world that America is no longer the symbol of the Statue of Liberty, holding her torch high for the huddled masses of the world. And for the refugees fleeing violence and terror, this policy is a death sentence,” said Congresswoman Judy Chu (CA-27), CAPAC Chair. “We have been resettling refugees in America safely for decades – and Trump’s claim that refugees will hurt American communities is simply not true. Welcoming immigrants and refugees – and welcoming people of all backgrounds and faiths – is at the core of who we are as a nation. And this diversity has strengthened, not weakened our country.”

Congressional members discussed rushing to airports over the weekend to help individuals who were detained and at risk of being deported due to the Executive Order. Speakers also discussed the parallels behind this action and incidents like the Chinese Exclusion Act of 1882 and the internment of over 120,000 Japanese Americans during World War II.

“What do I tell my children, the grandchildren of Chinese and Korean immigrants, about what is happening in our country? First, I tell them that it’s wrong. And in this case, I tell them we have been here before, and we have overcome it,” said Congresswoman Grace Meng (NY-06), referring to the Chinese Exclusion Act. “But I tell my children: America has made mistakes. History has not always shown our leaders to be right or just. But those who dissent in these critical moments do so because they can imagine a greater and stronger America… And today we say [President Trump’s] policies don’t make us safer. They don’t reflect our values.”

“The Asian Pacific American community has seen the devastating effects of discrimination codified into law,” said Congresswoman Pramila Jayapal (WA-07).“In my home state, Japanese-American families were rounded up and interned. In my own district, my own city of Seattle, rioters once targeted people of Chinese descent and expelled them. We're not going to let that shameful history repeat itself. We're not going backward. These executive orders are deeply un-American and we're going to fight them with everything we have.”

“President Trump’s morally reprehensible executive order is unconstitutional and un-American,” said Congresswoman Barbara Lee (CA-13). “Closing the gates to some of the most vulnerable people in the world will only serve to make the U.S. less safe. We are a nation of immigrants, and this ban flies in the face of our fundamental values as Americans. I will forcefully resist the anti-immigrant, anti-refugee, anti-Muslim policies of this administration.”

"The Asian American and Pacific Islander community has the responsibility to remind our nation 'never again,' and we have that privilege to speak on behalf of our ancestors who could not come to this country, to our ancestors who were discriminated against, who were interned and who were profiled, and who may not have the opportunity to tell their own story. We have to remind people of what refugees bring to this country and why the entire world demands that refugees who are fleeing violence and persecution be accepted and given safe haven,” said Christopher Kang, National Director, National Council of Asian Pacific Americans (NCAPA). “We need a government that will stand up to this president when he seeks any policy that goes beyond the law and beyond the constitution. These are only the first, and probably not the last, of these executive orders we will see, and I'm so proud to have the leadership of these members of Congress to speak for us and to fight for us."

“I, my organization and American Muslims, believe and support all necessary measures to secure our nation and its citizens,” said Nihad Awad, National Executive Director, Council on American-Islamic Relations (CAIR). “However, Donald Trump’s executive order is not based on evidence, national security or on hard facts. It is based on islamophobia, fearmongering and anti-Muslim prejudice.”

“The anti-Muslim rhetoric that President Trump campaigned on is now being borne out in destructive policy and leaves our communities increasingly vulnerable to violence,” said Suman Raghunathan, Executive Director, South Asian Americans Leading Together (SAALT). “SAALT will continue to partner with our communities to ensure we have an equal place and equal rights in the US, and that our voices ring clear as we fight for equality, protection, and dignity for all. SAALT's vision for dignity and inclusion for all has never been more important.”

“Today I stand proud as a daughter of refugees from Vietnam, whose parents risked their lives so that I could be free.  Free from terror, starvation, and incessant bombings of our homes. Free from political and religious oppression,” said Quyen Dinh, Executive Director, Southeast Asia Resource Action Center (SEARAC). “40 years ago, our nation welcomed over 1.3 million refugees from Vietnam, Laos, and Cambodia, like my parents, despite the vocal opposition of more than 60% of this nation – from civilians to elected officials who refused to accept responsibility for a war that was created by our own forces. I am a product of America's humanitarian legacy. Together with my community of 3 million strong, we will exercise our responsibility, voice, and power to uphold and protect democracy for all future generations of Americans."

The Congressional Asian Pacific American Caucus (CAPAC) is comprised of Members of Congress of Asian and Pacific Islander descent and Members who have a strong dedication to promoting the well-being of the Asian American and Pacific Islander (AAPI) community. Currently chaired by Congresswoman Judy Chu, CAPAC has been addressing the needs of the AAPI community in all areas of American life since it was founded in 1994.