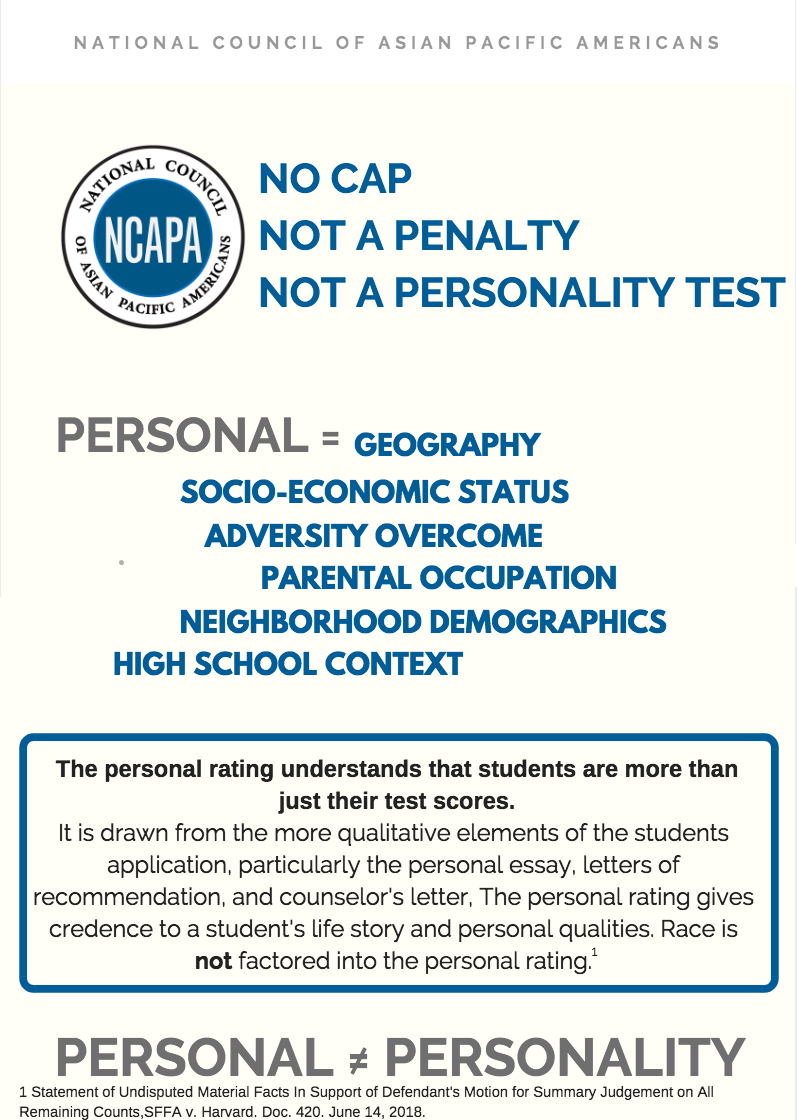 FACT: The “personal” rating is based on a wide variety of factors based on information gleaned from teacher recommendations, counselor notes, and the wider context of a student’s background. It exists so that the review process can recognize individuals’ personal qualities within the contexts of diverse lived experiences, not personality traits.

FACT: There is no evidence that Asian Americans are being denied entrance into Harvard or any other selective institution because they are Asian American. The plaintiff’s analysis  is remarkably misleading. The analysis failed to account for several vital factors and data. The Arcidiacono model does not isolate a relationship between race and likelihood of admission because the model egregiously ignores the role of the personal statement, letters of recommendation, and counselor’s note. These are all very influential factors in calculating the personal rating.

Any biases associated with being Asian American vanish when the model is corrected to include necessary application components and control for special admissions. As Card suggests in his analysis, there are other factors that might better explain any seeming disparities amongst Asian American applicants.

MYTH: Asian Americans have to score higher than White students to be admitted at the same rate.

FACT: The 2009 Princeton study that is frequently used to prove an “Asian American penalty” uses outdated data and a remarkably small sample. Court rulings and adjusted admissions practices have since changed what holistic admissions look like at colleges. At Harvard, Asian American students are admitted at a slightly higher rate than comparable White students.

MYTH: Asian Americans have the same advantages as White students.

While some Asian American communities have increased access to college readiness materials or well-funded schools, Asian Americans remain underrepresented across all special admissions categories at Harvard.

MYTH: Grades and test scores are the determining factors when applying to an elite institution.

FACT: Harvard and other highly selective institutions could fill their incoming classes with highly academically qualified students several times over. Elite institutions have educational missions that are not limited to educating the best test-takers. Instead, they aim to educate students with a multitude of talents. High academic rank alone does not entitle anyone to admission.

FACT: Harvard and many other elite colleges and universities have made commitments to diversity across ideological, cultural, racial, and socio-economic lines.

FACT: Admissions rates for students of color at Harvard have not been stagnant. The share of Asian American students in each admitted class has grown 27% percent since 2010.