The latest AAPI news from NCAPA and its 34 coalition members.

The nation continues to reel from all of the terrible news this week. While all eyes and hearts have been focused on the devastating flooding in Houston and other areas along the Gulf, immigrant communities and advocates have been on edge as rumors that President Trump plans to end the Deferred Action for Childhood Arrivals (DACA) program continue to bubble. Hundreds of thousands of promising young people have benefitted from DACA over the past five years, and it has given them the opportunity to live, study, work and contribute to our country without fear of deportation. Ending the program would be devastating. Please contact your representative, support NAKASEC’s 24-hour DREAM Action and sign the National Immigration Law Center petition to help defend immigrant communities before Sept. 5.

Meanwhile, Congress returns to session after Labor Day. When they return, they’ll need to pass a federal budget by Oct. 1, and pass legislation to extend the debt ceiling limit before mid-October to avoid a shutdown of the federal government. The budget proposal that President Trump sent to Congress includes massive cuts to agencies, like the Federal Emergency Management Agency and the Coast Guard, which are essential to respond to national disasters. Vital programs and services, like Medicaid, Social Security, and food stamps, depended upon by millions of vulnerable AAPIs, could also suffer cuts.

Moreover, the President has threatened to shut down the government if Congress doesn’t fund the expensive, un-American, and deeply offensive southern border wall. Stay tuned and contact your representatives in Congress to make sure that their budget priorities align with yours.

Last week, the nation reacted furiously as the White House made multiple announcements just as Hurricane Harvey hit the Texas coast. The President signed a directive reinstating a ban on transgender individuals from serving in the military, actualizing a surprise tweet sent in late July. However, the directive gives military leadership wide latitude on implementation and Defense Secretary Mattis has stated his intention of leaving in place the Obama-era policy allowing for transgender individuals to continue serving while the policy is studied. The military ban faces several lawsuit challenges to its constitutionality.

On top of that attack on the civil rights of our military, President Trump then announced a presidential pardon for former Maricopa County Sheriff Joe Arpaio, the disgraced lawmaker convicted of criminal contempt for his unrepentant terrorizing, mistreatment, and civil rights abuses against immigrant communities in Arizona.

To end on some good news, federal courts have blocked Texas law SB 4 for targeting sanctuary cities from going into effect and struck down a revised Texas voter identification law for intentionally discriminating against minority voters. You can learn more about SB 4 from NCAPA member NQAPIA’s educational multilingual fact sheets in English, Chinese, Vietnamese, and Urdu. 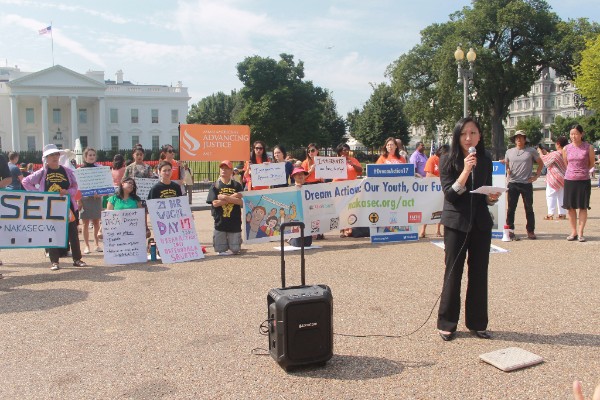 NCAPA Members Hold Press Conference in Support of DACA
NCAPA member organizations held a press conference in front of the White House to support the DACA program, and were joined by DACA beneficiaries and Hanseul Kang, state superintendent of education for the District of Columbia. Members of Congress issued statements of support read by speakers during the presser. Watch the full video.

Outreach and Navigator Announcement Threatens Success of Open Enrollment
The Centers for Medicare & Medicaid Services (CMS) announced news about reduced outreach and education during the Open Enrollment Period and reductions in Navigator funding. The Asian & Pacific Islander American Health Forum (APIAHF) issued a response saying this could threaten the success of the Marketplaces, particularly among populations who already face barriers to enrolling and re-enrolling in coverage, such as limited English proficient and immigrant communities.

Civil Rights Organizations and Census Experts Highlight Damaging Consequences of Congress’ Failure to Fund the 2020 Census Appropriately
Asian Americans Advancing Justice | AAJC joined groups in The Leadership Conference on Civil and Human Rights for a press briefing to discuss how a lack of sufficient funding for a 2020 Census would have harmful consequences, particularly for communities of color.

Sikh American Man Stabbed and Killed in Idaho
A teenager in North Idaho was arrested Monday in connection with the killing of Gagandeep Singh, 22, while Singh was driving his cab. Singh was a third year software engineering student and app developer. The Sikh American Legal Defense & Education Fund (SALDEF) has been engaged with local and federal law enforcement to ensure his murder is thoroughly investigated.

NAKASEC Continues 22-Day, 24-Hour DREAM Action and Vigil
NAKASEC is 18 days into their 22-day presence in front of the White House to defend the Deferred Action for Childhood Arrivals (DACA) program. Learn more about how to join and take action during their last week.

JACL also compiled a list of relief funds to support.

Make DACA Permanent, Support the DREAM Act
Sign NAKASEC’s petition to call on President Trump and the Department of Homeland Security to protect immigrants and keep families together.

Tell Congress: America Needs Our Immigrants
Sign the Asian Americans Advancing Justice petition to tell your member of Congress to oppose the RAISE Act, which would separate families and cut in half the number of green cards available each year.

Download the Immigrant Know Your Rights Smartphone App
NCAPA member the National Korean American Service & Education Consortium (NAKASEC) designed and translated a smartphone app for immigrants and community members who are in crisis or have been approached by police or ICE. The multilingual app currently supports Korean, Spanish, Portuguese, Chinese, and English.  Click here to download this helpful app!

ICYMI: AAPIs in the News

Undocumented Asians are imploring the president not to take away DACA (Esther Yu Hsi Lee, ThinkProgress)

Now - Sept. 6: NCAPA member NAKASEC and their partners Korean Resource Center, Hana Center and the Franciscan Action Network are holding a 22-day DREAM Action and Vigil in front of the White House.

The Center for Asian American Media (CAAM) is accepting submissions for CAAMFest May 2018. CAAMFest is the nation’s largest showcase for new Asian and Asian American films.