The latest news, events and ways to take action from NCAPA and its 34 member organizations.

Engage with us on social media all month using #APAHM17 and tweeting at @NCAPATweets.

The House of Representatives voted to repeal the Affordable Care Act last Thursday. If the American Health Care Act passes, it would eliminate coverage for an estimated 24 million Americans. In response, APIAHF urged the public to oppose the repeal bill and ask their Senators to vote against it. SEARAC also rejected the vote, saying the American Health Care Act would exacerbate already stark disparities in the Southeast Asian American community.

OCA - Asian Pacific American Advocates and its chapters recognized the 135th anniversary of the Chinese Exclusion Act by supporting Day of Inclusion efforts nationwide, including efforts to pass resolutions and proclamations observing the anniversary across the country.

The Sikh American Legal Defense and Education Fund (SALDEF) commended the International Basketball Federation’s (FIBA) ruling to let Sikhs play basketball with their articles of faith. The ruling allowing turbans, yarmulkes, and hijabs in international basketball competitions comes after several years of interfaith advocacy with Jewish, Muslim, and other groups.

AAPIs in Education during the First 100 Days

The NCAPA education committee held a webinar last week on the various impacts on AAPIs in education during this administration. Watch the full webinar here.

Congress denied the administration funding to begin construction of a border wall, but the deal included an additional $1.5 billion in border security. Asian Americans Advancing Justice released a statement expressing their disappointment about the continued targeting of immigrants by the new administration.

No Justice for Black Lives

Asian Pacific American Labor Alliance, AFL-CIO (APALA) is outraged and saddened by the murder of Jordan Edwards, a Black teenager, at the hands of a police officer in April, and by this week’s announcement that the Justice Department (DOJ) would not file federal charges against the police officers responsible for the murder of Alton Sterling last July.

In reaction to the President’s executive order on religious liberty, APIAHF released a statement that the order creates additional barriers for AANHPIs in accessing care.

NCAPA IN THE NEWS 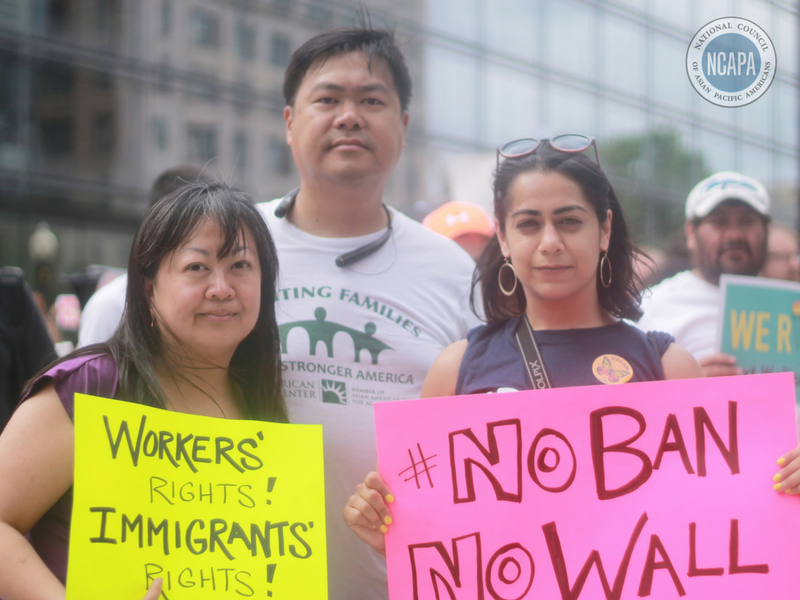 Marita Etcubanez, Ben DeGuzman and Ameesha Sampat at the May 1, 2017 rally for immigrant and worker rights in Washington, D.C. (NCAPA Photo)

-Know Your Rights materials and trainings in Korean and English.-The Dream Show webisode series on YouTube shares policy updates and episodes are produced in Korean.

IN CASE YOU MISSED IT

What’s at Stake? AAPIs and the repeal of the ACA (Sono Shah, AAPI Data)

I know the fears of immigrants in the schools I oversee. I was undocumented myself. (Hanseul Kang, state superintendent for public schools in D.C., The Washington Post)

Confessions of a wealthy immigrant: “model minority” is a myth (Iimay Ho, Vox)

Saturday, May 13 @ 10:00 a.m. - 2:00 p.m.: The National Korean American Service & Education Consortium (NAKASEC) will host a naturalization clinic at the Little River United Church of Christ (8410 Little River Turnpike, Annandale, VA 22003) on an appointment basis.  Community members can schedule an appointment by calling the NAKASEC office at 703-256-2208 no later than May 10. Spaces are limited and appointments will be taken on a first-come-first-serve basis.  Community members should bring the $10 clinic fee in cash or a check made out to NAKASEC to cover the costs of printing.  At the clinic, community members will receive assistance in Korean and English with completing citizenship applications (N-400) and an application review by an immigration lawyer tor qualified legal representative. Please click here to view a flyer with a list of documents and information to prepare in advance of your appointment, along with a $725 check or money order.

Wednesday, May 24 @ 12:30 - 1:30 p.m. Conquering Hepatitis B! A Roadmap for a Cure. Congressional Briefing hosted by Hepatitis B Foundation, AAPCHO and the National Viral Hepatitis RoundTable. Cannon HOB. RSVP to [email protected]

Have a story to tell as an #AAPI journalist? Tell the Asian American Journalists Association (AAJA) about it and you could present at #AAJA17 for a cash prize!