On Citizenship Day, NCAPA staff reflects on what it means to be an American citizen 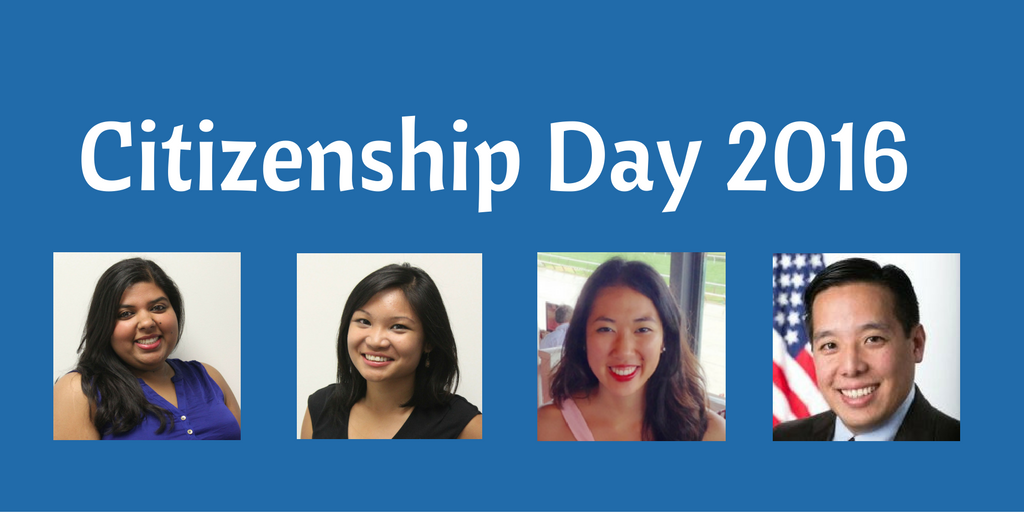 On Citizenship Day, reflecting on what it means to be an American citizen

Citizenship Day commemorates the signing of the United States Constitution, and it’s a day we remember the privileges we enjoy as citizens of our nation.

Staff at the National Council of Asian Pacific Americans (NCAPA) reflect on why citizenship is so important and why this matters for Asian Americans and Pacific Islanders (AAPIs).

Citizenship affords me the right to civic engagement to participate in this country’s democracy. It affords me a lot of privileges, particularly the right to vote. Being part of a minority community, and as a woman of color, it’s important to make sure I’m engaged in advocating for issues that matter to me and issues that affect my life.

Looking back on my own family and background, the 2008 election was the first election my parents were eligible to vote in after becoming U.S. citizens. They moved to this country in the 1980s, and by 2008, they really felt strongly that they wanted to vote for President Obama. Since then, they’ve become more engaged in the political process. Now, we all vote to ensure that our AAPI voices are heard.

I witnessed my parents wait for years to apply for U.S. citizenship, and I know it's not something to take for granted. I'm proud to take advantage of the many benefits of being American as a naturalized citizen. There are many things I don't have to worry about, like having the proper documents to travel, apply for jobs, and stay in the country freely.

Most importantly, civic duty is important. I was able to vote in my first local election as soon as I turned 18. In this important election, I want to make sure that as an American, and someone who identifies as AAPI, my vote matters more than ever. I want to make my vote count not just for me, but for those living in this country who are not able to vote.

Having a citizenship guarantees us the rights that our parents, grandparents, and the generations before them in the United States fought so hard for.  My ancestors in the United States were not even allowed to vote until 1943, when Chinese Americans were given the right to become U.S. citizens.   I was born with the right to vote in this country, to work wherever I want, and even to hold public office (if I so desired).  Sometimes we take these rights for granted and disengage from our civic responsibilities.When I was young, my parents told me stories about when they got their citizenship.  They would study for weeks to make sure they passed the test that would grant them the ultimate status in this country, and that would get them step closer to achieving the American dream. With these rights, we also have certain responsibilities.  As the election approaches, we need to remember our civic duty and be a part of the democratic process.  Asian Americans and Pacific Islanders historically have lower voter turnout rates than other ethnic groups but it is more important now than ever before that we exercise our right to vote!  Our voice matters because when we cast a vote we have the ability to shape the world according to the values that are important to us.

One of my most cherished keepsakes from my father is his certificate of naturalization, which sits on my desk—a symbol of my parents' courage and sacrifice and a memory of one of the most important days in our family history. Next to it is a photograph of my dad with President George W. Bush, who appointed my dad to serve on the National Council of Disability. My dad’s life story—rising from a blind, orphan teenager in South Korea to advising the President and Congress on disability policy—is in many ways an "only in America" kind of story. As we celebrate Citizenship Day, I am reminded that his work in government also is the kind of story that can only be told because he was a U.S. citizen—citizenship is a requirement to serve in most federal government jobs.

Indeed, there are many benefits of citizenship, and Citizenship Day is an opportunity to reflect on them, to appreciate them, and to make sure we take advantage of them—especially our right to vote.

We also must continue to reach out to the 8.8 million Legal Permanent Residents in the United States who are eligible to become citizens, but may not know of the many advantages or understand how to apply.

Finally, Citizenship Day is a time to reflect on what makes our nation so great—its diversity. Its promise, which has drawn people from around the world in search of a better life. And its opportunity for people like my father to be able to reach his life’s potential.

If you are in the D.C., Maryland and Virginia and are a lawful permanent resident interested in citizenship, click here for free citizenship clinics in the area tomorrow, Saturday, Sept. 17.