Community advocates within the National Council of Asian Pacific Americans prior to a rally against anti-Muslim hate on Dec. 16. (Photo: Ryann Tanap)

With the backdrop of the Japanese American Memorial to Patriotism During World War II, leaders of the National Council of Asian Pacific Americans (NCAPA) convened a rally Wednesday to declare that opposing anti-Muslim hate and xenophobia will be one of its highest priorities.

Speakers united under a common message to support Muslim, Sikh, Arab and South Asian American communities. They also drew upon unique ties to the past, as Asian Americans have been the subject of discriminatory policies from the Chinese Exclusion Act of 1882 to the incarceration of 120,000 loyal Japanese Americans during World War II, to profiling and prejudice following 9/11.

NCAPA and many of its 35 member organizations have issued statements standing against anti-Muslim hate.

Below is a summary of yesterday’s rally, and longer versions of many of these remarks can be found here. 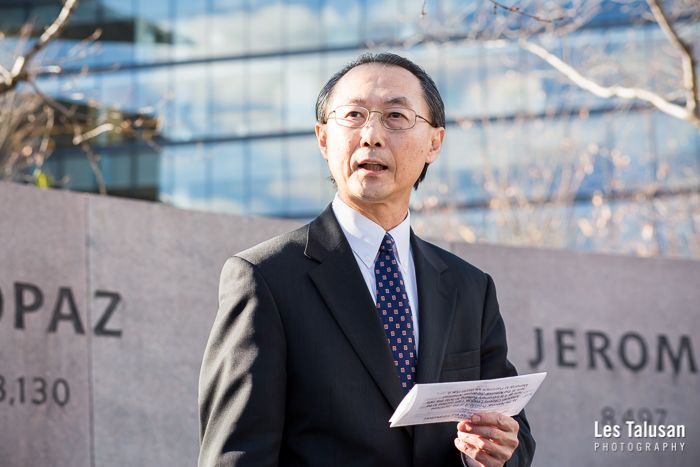 David Lin, Japanese American Citizens League (JACL) National President, was the first to speak during the rally.  He emphasized that the policies that imprisoned 120,000 Japanese Americans following Pearl Harbor should not be repeated and reiterated that JACL stands with the Muslim, Sikh, Arab, and South Asian American communities because Japanese Americans have stood on this dark side of history before. 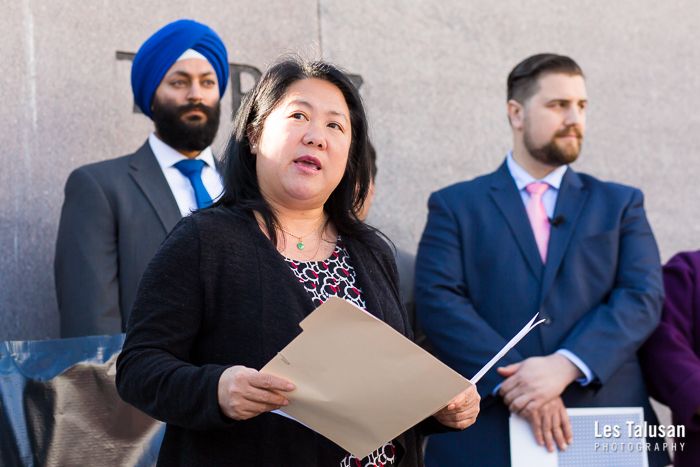 Mee Moua, president & CEO of Asian Americans Advancing Justice | AAJC and NCAPA Executive Committee member, recalled her experiences growing up in the Midwest as a Southeast Asian political refugee. She and her family were seen as the enemy and were often targets of hate and racial slurs. “Right now, we have a choice – to continue to be invisible, or to speak out,” Moua told the crowd. “Now, as we come together to oppose violence and anti-Muslim hate and bigotry, I call on each and every one of you to make your voice heard so we can shut down this ugly rhetoric and ensure we all a protected and respected part of America.” 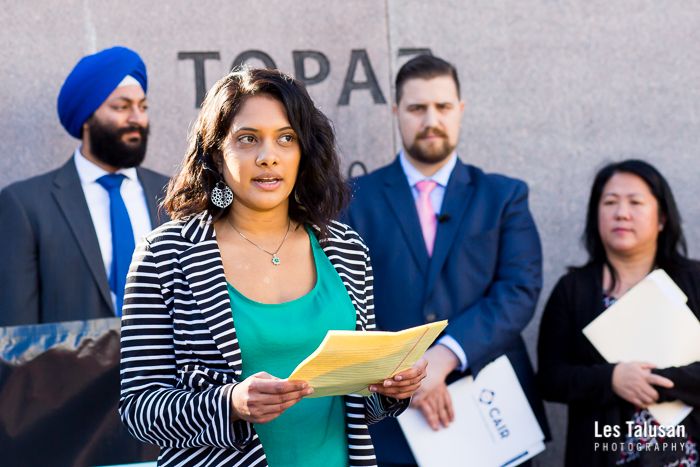 Lakshmi Sridaran, director of national policy and advocacy at South Asian Americans Leading Together and co-chair of the NCAPA Civil Rights Committee, challenged rally goers to confront anti-Muslim hate within our own families and communities and to draw the connections between hate and the public policy that affects our communities. 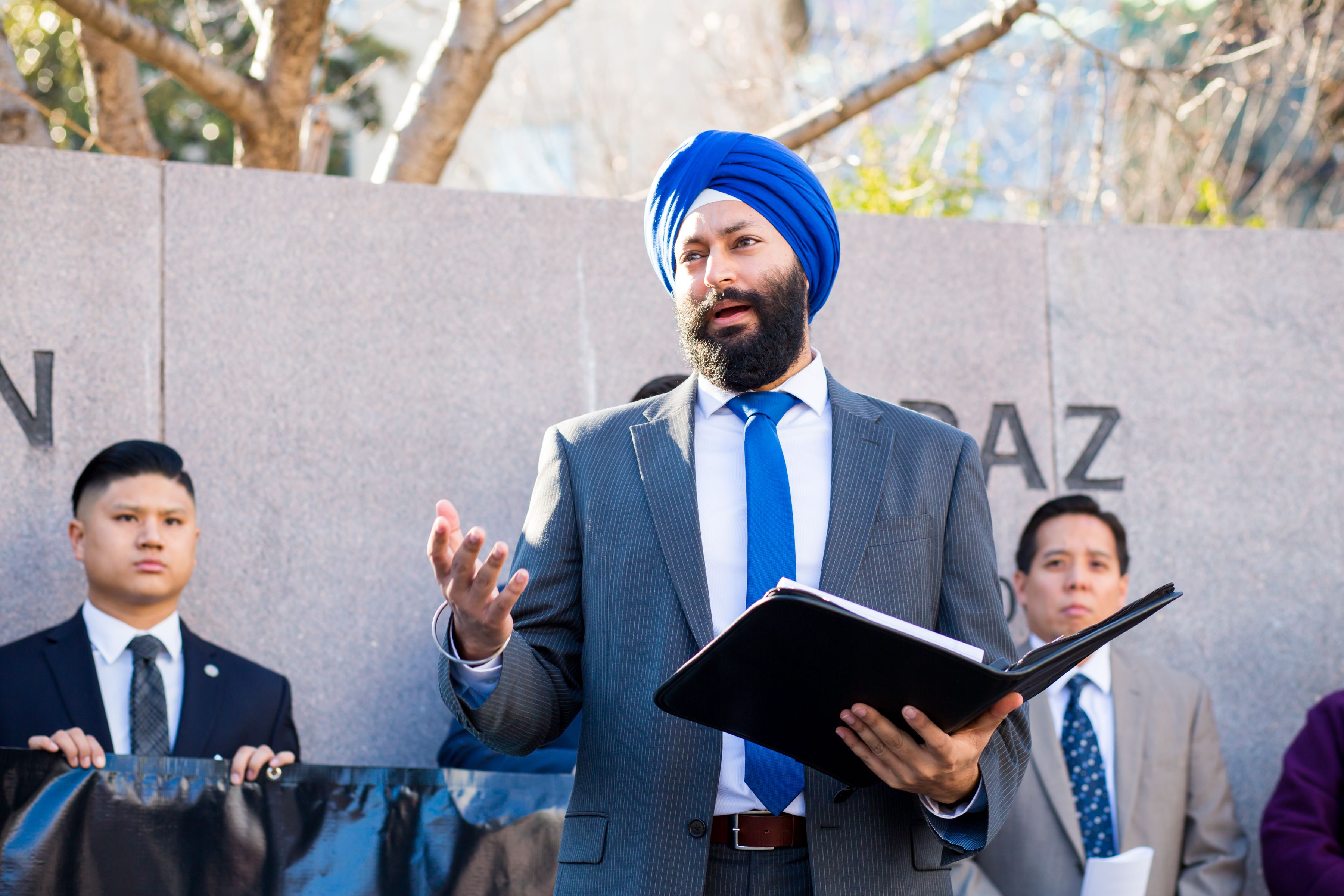 Jasjit Singh, executive director of the Sikh American Legal Defense and Education Fund, asked. “What does it say about our country when we cannot learn from the darkest chapters in our history? When we cannot recognize that the actions of an individual do not reflect the actions of an entire people?” He added, “These are the times when it is critical for us to speak actively against the hate that is all around us. I was inspired last week to see a hashtag called "Vigilant Love" -- highlighting the notion that we need to aggressively root out evil and shame those who fuel the fire of division.” 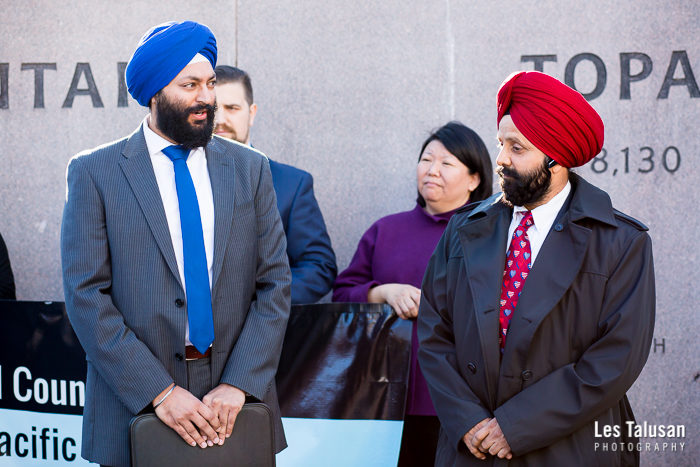 Also joining us from Mesa, Arizona, was Rana Singh Sodhi. Mr. Sodhi is the brother of Balbir Singh Sodhi, the first hate crime fatality in the post-9/11 backlash. Balbir was a gas station owner who was killed on Sept. 15 by a man who claimed to be a 'patriot' doing his duty. In the decade following his brother's death, Rana has toured the country speaking for tolerance and unity. 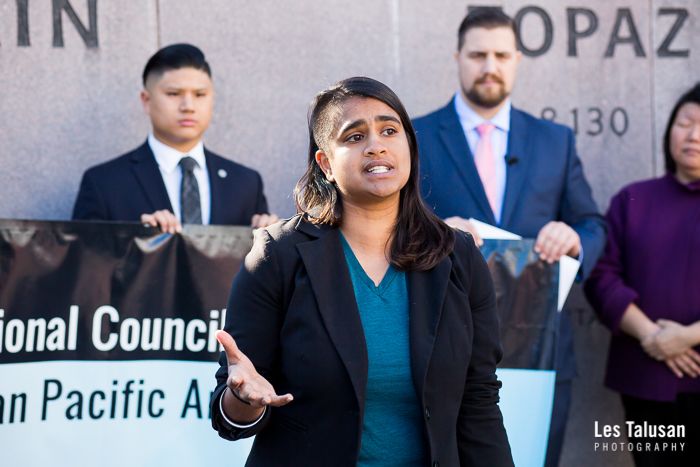 Sasha W., organizing director of the National Queer Asian Pacific Islander Alliance, said, "This is a moment for us to stand here and commit to bringing Muslim voices to the forefront,” and she encouraged everyone to include local voices in our dialogue and efforts to become stronger allies. 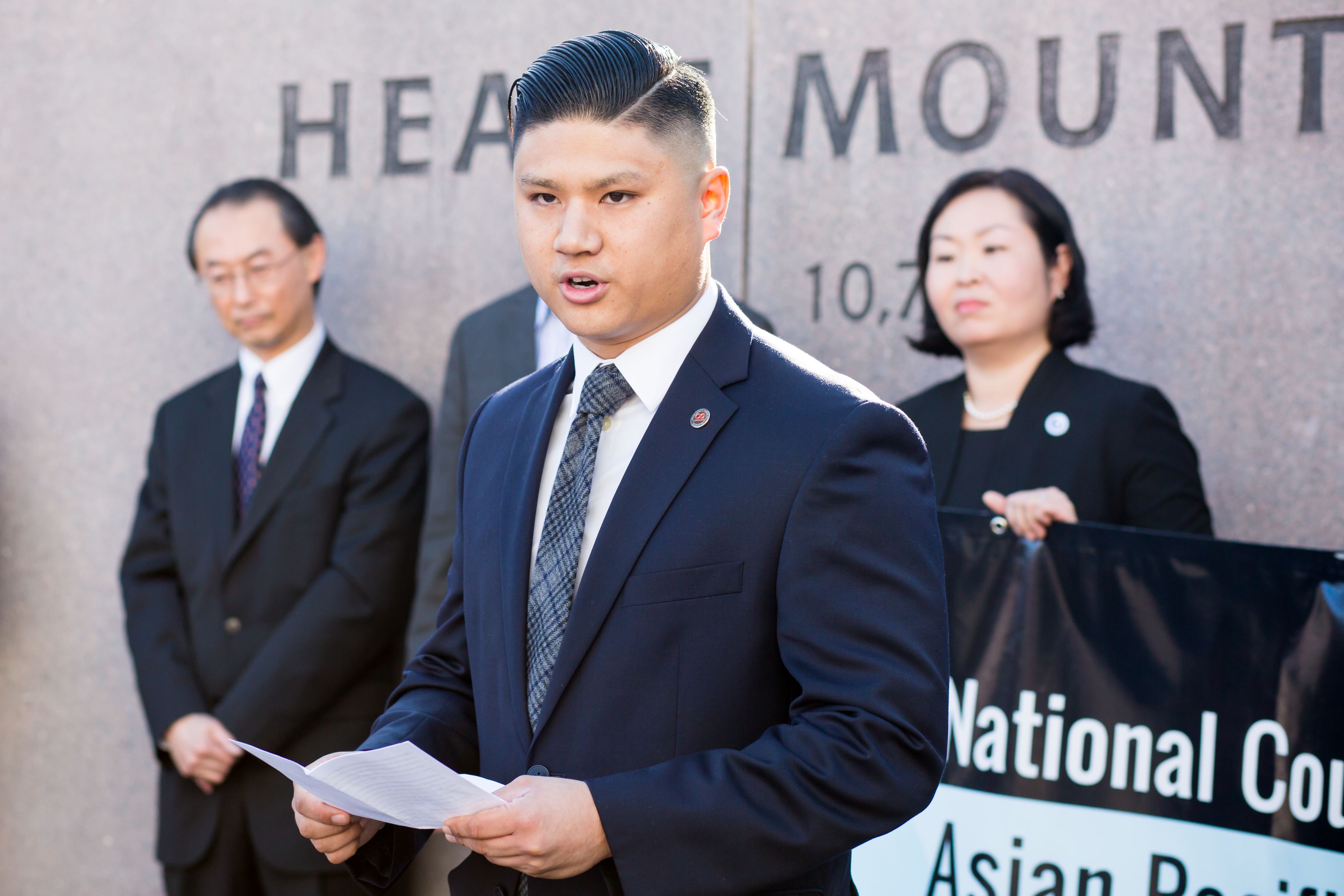 Nick Lee, communications associate of OCA - Asian Pacific Americans, told of the racism his grandfather faced as part of anti-Chinese sentiment. “We are in a position of privilege to help others by speaking out about our history of persecution in order to fight back against the oppression of others,” Lee said, later adding, “Shame on those who stir up hatred and incite violence to get ahead in the polls. But most of all, shame on us when we see something and say nothing.” 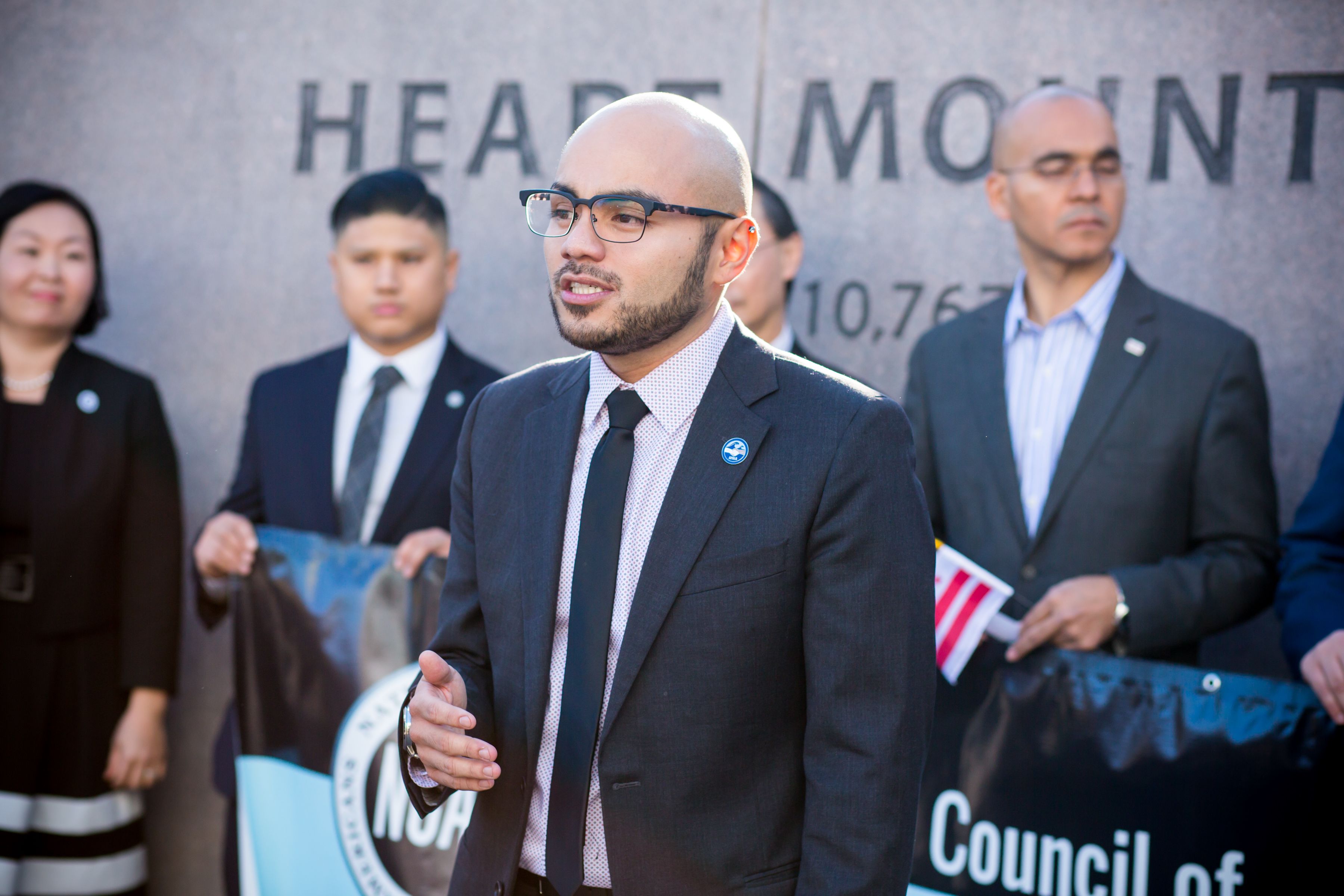 Gregory Cendana, executive director of the Asian Pacific American Labor Alliance and immediate past Chair of NCAPA, said “The criminalization of Arab, Muslim, Sikh and South Asian American communities is un-American and our members will do whatever we can to ensure our brothers and sisters can live, work and love freely in our homes, schools, worksites, places of worship and communities.” 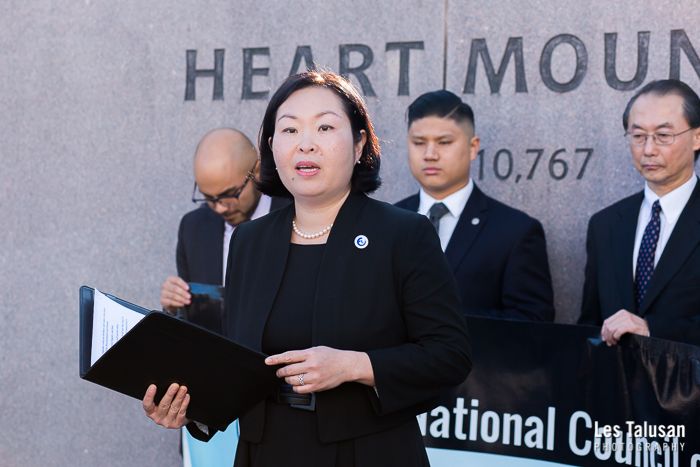 Tina Matsuoka, executive director of the National Asian Pacific American Bar Association, said “I understand that people are afraid, but creating more fear will not make things better...We cannot go back to a time when intolerance and discrimination were acceptable, when our laws were fueled by stereotypes, fear, and mistrust.” She concluded, “We are better than this. And we will not be silent.” 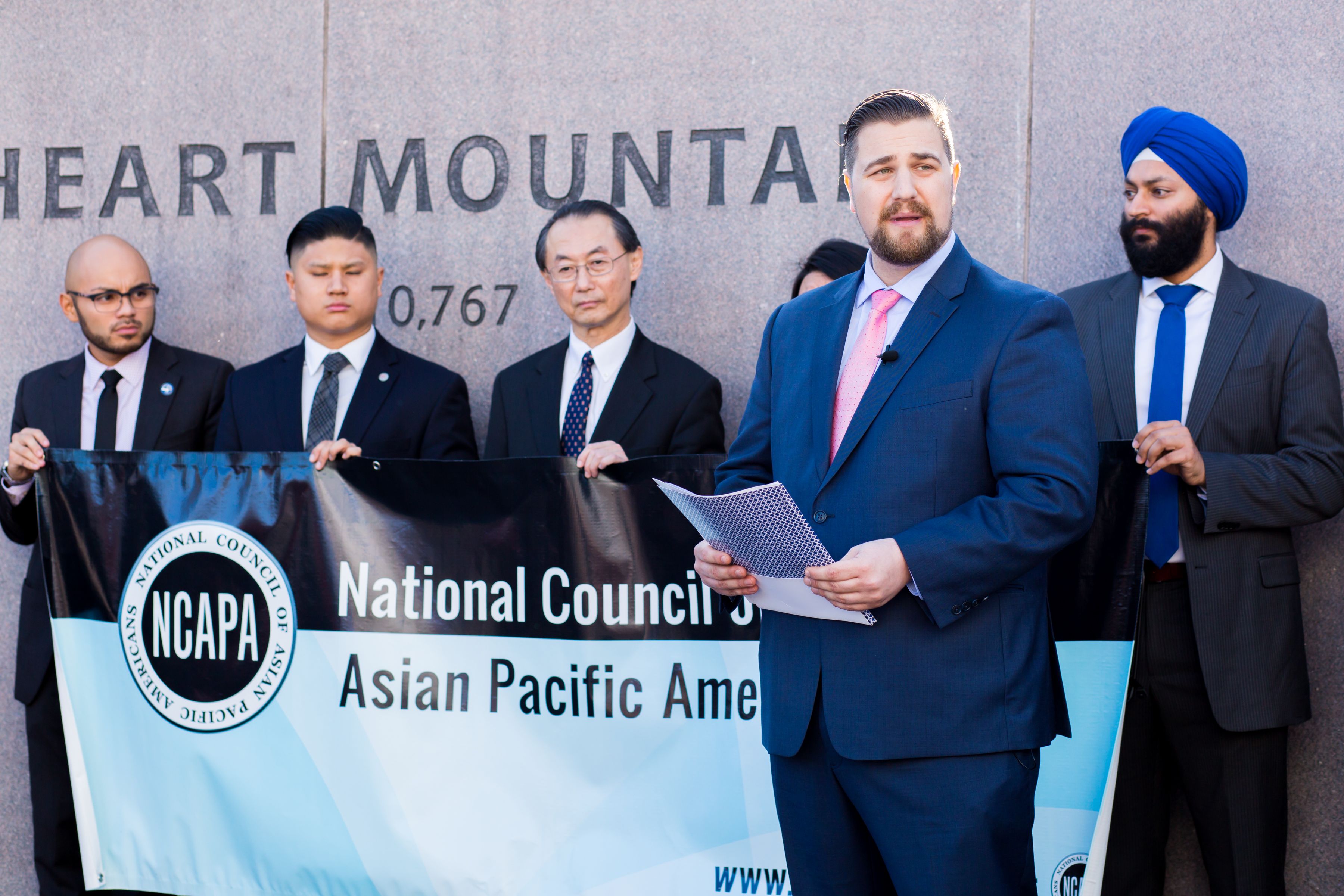 Robert McCaw, government affairs department manager of the Council on American-Islamic Relations (CAIR) said, “We must stand united in a common cause against all forms of bigotry.” He also noted that while CAIR is not an NCAPA member, “Events like this, of solidarity, remind us that we are not alone.” 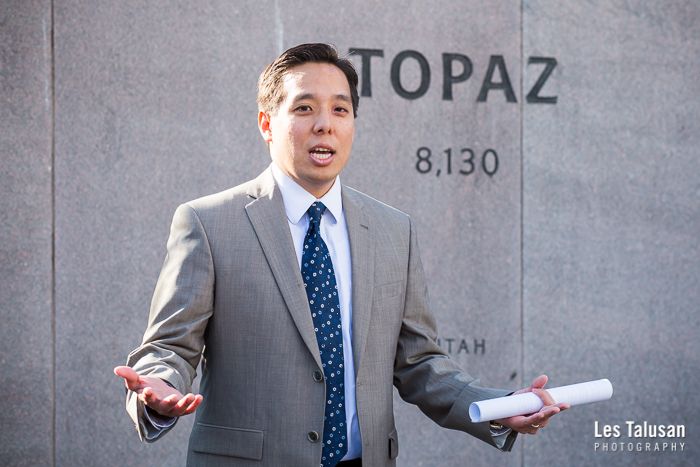 NCAPA National Director Christopher Kang rejected the characterization that standing up to anti-Muslim hate is an effort to be politically correct. He noted that words, bias, and bullying matter and should not be dismissed as “microaggressions.” He then read a list of 49 acts of anti-Muslim violence and hate that have been publicly reported since the Pairs terrorist attacks last month, and he concluded the rally by saying, “We know that there are many pressing priorities and concerns facing the Asian American Pacific Islander community today, but we stand united—with our voices, our support, and our solidarity—to declare that opposing anti-Muslim hate, xenophobia, and bigotry will be one of the highest priorities for NCAPA and to declare that today’s rally is just the beginning of that effort.”

Based in Washington, D.C., the National Council of Asian Pacific Americans is a coalition of 35 national Asian Pacific American organizations that serves to represent the interests of Asian American, Native Hawaiian, and Pacific Islander (AANHPI) communities and to provide a national voice for our communities’ concerns. Our communities are the fastest growing racial/ethnic group in the United States, currently making up approximately six percent of the population.